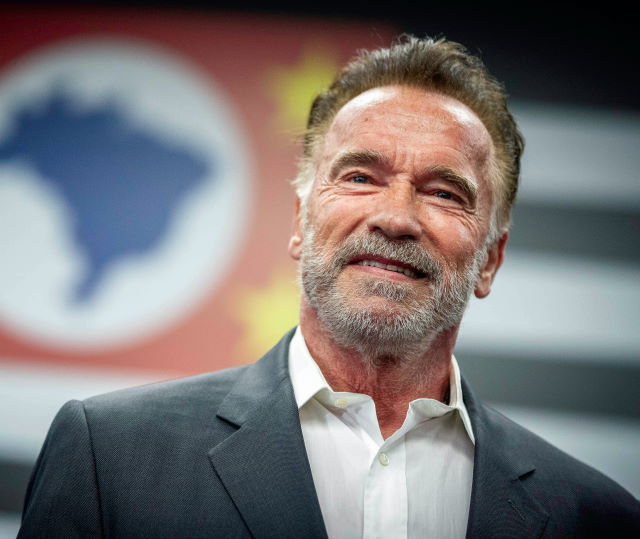 The clearest demonstration of California organized labor’s power in the initiative process, and perhaps its power in the state in general, is the defeat Big Labor handed to Governor Arnold Schwarzenegger (R) in 2005. Credit: Gage Skidmore. License: https://bit.ly/3bBSfi7.
by Michael Watson

No discussion of California politics and policy can omit its extensive use of the ballot measure, and no discussion of California labor unions can omit their positions as among the biggest spenders for and against the state’s extensive lists of “propositions.” According to OpenSecrets, the largest organizational contributor to ballot measure committees in California over the past two decades is the California Teachers Association. The SEIU California State Council is fifth largest. As an industry class, public-sector unions are the largest contributors. The union activism has obstructed needful reform to California politics and government, hiked taxes to feed the state’s bloated budgets, sought to further enshrine radical social liberalism, protected union privileges and powers, and provided a forum for organized labor to retaliate against businesses for organizing grievances.

The clearest demonstration of California organized labor’s power in the initiative process, and perhaps its power in the state in general, is the defeat Big Labor handed to Governor Arnold Schwarzenegger (R) in 2005. In 2003, the ex-actor had ascended to the governorship when voters recalled second-term Gov. Gray Davis (D) by 11 points and handed Schwarzenegger a comprehensive victory over then-Lieutenant Governor Cruz Bustamante (D) in the replacement vote. In 2005, which “the Governator” deemed his “year of reform,” he presented four initiatives to the ballot. Steven F. Hayward describes them:

Arnold decided to roll the dice by calling for a special election in 2005, which he called the Year of Reform, on an ambitious suite of ballot initiatives that included a spending limit, redistricting reform to eliminate partisan gerrymandering, tightening the tenure process for public-school teachers, and a “paycheck protection” measure to clip the political activity of labor unions.

The unions, especially government worker unions like CTA and SEIU, marshaled their forces to defeat Schwarzenegger’s reform agenda. All told, unions spent roughly $100 million on the campaign. To raise extra funds, government-sector unions like SEIU Local 1000 charged members and forced-fee payers “special assessments.” Those assessments were challenged all the way to the Supreme Court, which ruled their manner of administration improper in Knox v. SEIU, a predecessor to the Janus v. AFSCME, which struck down all government-sector forced-dues arrangements.

Since the passage of Proposition 13 in 1978 limited the ability of simple majorities in state and local legislatures to raise taxes, the proposition ballot has been a key site for tax increases since require only a majority vote. As a result, organized labor has put tens of millions of dollars behind campaigns to raise California’s high income tax rates and keep them high, contributed millions more to hike tobacco taxes, and pressed to repeal the portion of Proposition 13 limiting property taxes on certain commercial properties.

As we noted in Capital Research magazine on social justice unionism, California’s labor unions have been key funders of efforts to codify the state’s social liberal/radical progressive mentality at the ballot box. In 2008, the California Teachers Association’s political action committee on the ballot measure was the second-largest contributor to defending same-sex marriage against a referendum challenge. In 2016, the teachers union and SEIU units backed a measure allowing languages other than English to be used in public instruction, repealing an immersion requirement voters had passed in the 1990s. In 2020, a number of government-worker unions and private-sector unions supported unsuccessful campaigns to repeal the state’s ban on race-based affirmative action and to sustain a “bail reform” that replaced cash bail with “risk assessments.”

While tax hikes and general liberalism rally Big Labor to fund California ballot campaigns, few issues drive union cash into the fray to a greater degree than preserving union privileges. In 2005, one of Schwarzenegger’s failed reforms was a “paycheck protection” measure requiring affirmative written consent to use union dues for political purposes. In 2012, unions spent tens of millions successfully defending their powers to use payroll-deducted funds for political purposes, with the California Teachers Association contributing more than $20 million and the SEIU more than $11.5 million. More recently, in 2020 government-worker unions like SEIU and private-sector unions like the Teamsters spent millions unsuccessfully defending against a partial override of California’s onerous AB5 contracting law, which is the model for congressional Democrats’ PRO Act.

SEIU-United Healthcare Workers West has used the California statewide ballot to repeatedly wage battle with dialysis clinics the union hopes to organize. The Santa Rosa Press-Democrat editorial board called the 2018 version of the ballot battle “an abuse of the initiative system” in its editorial calling on voters to reject the SEIU’s measure. Between spending on the 2018 measure and a 2020 successor measure, both of which failed by wide margins, the SEIU has staked $25 million against the clinics’ over $200 million in the battle of attrition. While SEIU-UHW leader Dave Regan has denied that the series of initiatives is a unionization tactic, a representative of the left-leaning organization Consumer Watchdog told Politico, “He [Regan] doesn’t need to win to win . . . and that’s the abuse of the initiative process.”

To the extent it uses the initiative process as a pain point to support its organizing, SEIU-UHW is merely operating in standard procedure for unions exploiting California legislation and constitutional structure. Perhaps the most notable example of this is the so-called “greenmailing” engaged in by building trades unions, which file complaints against project developers under the expansive California Environmental Quality Act to pressure builders into unionization by project labor agreements.

California’s present political and policy state is largely driven by its organized labor movement, which has been stronger than the national average even during the state’s more politically competitive history. Concerningly for those beyond the reach of Sacramento, the state and its localities are a proving ground for national-level organized labor. It is not a coincidence that the Biden administration’s Deputy Secretary of Labor, the number-two person in the department, is the former California Secretary of Labor. Those who do not wish to see the Golden State’s political economy adopted nationwide must take note of its history and the power of its labor movement as a warning not to echo.