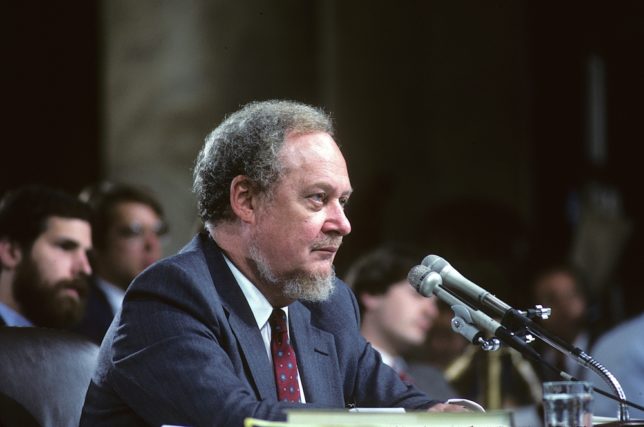 The reversal of Roe v. Wade has caused some on the left to turn against one of their heroes. They believe the late Supreme Court Justice Ruth Bader Ginsburg irresponsibly died during the Trump administration and instead should have surrendered to retirement at least five years earlier so a Democratic president could name her replacement.

To remain consistent with this thinking (if that’s the correct word), the pro-Roe partisans need to expand their list of accidental traitors.

At the top of the list should be President Joe Biden. As chairman of the Senate Judiciary Committee in 1987, Senator Biden (D-DE) oversaw the inaugural “borking” when he helped spike the Supreme Court nomination of Judge Robert Bork. Biden’s work turning “Bork” into a verb launched the era of severely hostile Supreme Court confirmation battles that is with us to this day.

But he was also likely landing one of the five blows that knocked out Roe in 2022.

And there was a long list of left-leaning accomplices pushing Biden to bork Bork that included the American Civil Liberties Union, Planned Parenthood, People for the American Way, the Alliance for Justice, the National Partnership for Women and Families, and the Lawyers Committee for Civil Rights Under Law.

A character-assassinating diatribe against Bork from then-Sen. Ted Kennedy (D-MA) captured the malevolent spirit of that mob that is with us still:

Robert Bork’s America is a land in which women would be forced into back-alley abortions, blacks would sit at segregated lunch counters, rogue police could break down citizens’ doors in midnight raids, school children could not be taught about evolution, writers and artists could be censored at the whim of the government, and the doors of the federal courts would be shut on the fingers of millions of citizens for whom the judiciary is—and is often the only—protector of the individual rights that are the heart of our democracy.

If they’re consistent, those angry at Ruth Bader Ginsburg should add Biden and his accomplices to their enemies list.

It’s true that Ginsburg’s replacement, Amy Coney Barrett, delivered one of the five critical votes to overturn Roe. In his concurring opinion, Chief Justice John Roberts sided with five justices on the narrow question of defending the Mississippi abortion regulation at issue in Dobbs. But Roberts, like the three left-leaning dissenters, did not vote to reverse Roe v. Wade.

So, no Barrett, no reversal of Roe. But the same can be said of the vote provided by Justice Brett Kavanaugh, who is likely on the Court because of the actions of the people and groups that participated in the first borking party in 1987.

Bork passed away in December 2012, at age 85, and at the end of Obama’s first term. As recently as October 2011, media accounts portrayed Bork as still mentally sharp and advising Republican presidential candidate Mitt Romney. All else being equal, if Bork had been confirmed to the Supreme Court in 1987, then it is quite plausible he (like Ginsburg) would have either died in office or been forced to leave it because of ill health. And that would likely have occurred at a time when a Democratic president would have been able to name his replacement.

Instead, after the borking in 1987, President Ronald Reagan nominated and won confirmation for Justice Anthony Kennedy. Kennedy held the spot for far longer than Bork likely would or could have and didn’t retire until 2017 (at age 81). This allowed President Donald Trump to nominate Brett Kavanaugh as his replacement.

A deliberate act by Biden and those lefty groups in 1987 likely led to Kavanaugh filling Kennedy’s seat, rather than an Obama appointee filling Bork’s. Biden and his 1987 allies didn’t have to launch a character assassination against Bork that befouled the Supreme Court confirmation process for decades afterward. But in doing so they probably delivered one of the five votes that ended Roe.

Justice Ginsburg’s role in reversing Roe was much more benign. If it was a failure at all, then it was the epitome of a human failing. We all must die sometime, and every single one of us should want to be doing something meaningful that we love until the very end. That’s arguably a heroic act, and it’s at the least a very forgivable one.