In the run up to the 2022 midterm elections, professional activists were desperate to drive up voter registration rates everywhere they could, particularly on college campuses. And they wanted taxpayers to fund it, too.

Earlier this year, President Joe Biden’s Department of Education instructed universities that they must engage in voter registration campaigns in order to receive further federal student aid grants, a major source of revenue for higher education institutions. That includes using Federal Work-Study funds—monies meant to encourage part-time campus jobs to help cover tuition—to pay students who register their classmates, both on and off campus.

Add to that the activists at ALL IN Campus Democracy Challenge, which rewards faculty and students for launching registration and “voter education” efforts at their schools in order to boost “participation in American democracy.” To date, ALL IN has targeted hundreds of universities for mass registration drives.

ALL IN—like all nonprofit groups—is legally nonpartisan, meaning it isn’t aligned with either political party. But it boasts about its “theory of change,” which aims to achieve a “more representative American democracy” through “civic learning,” “political engagement,” and “voter participation”—fuzzy buzzwords that translate to greater Democratic Party turnout and political power.

One member, Florida’s Miami Dade College, posted a “2022 Democratic Engagement Action Plan” on ALL IN’s website detailing how it plans to pay students to register their peers. Partial funding came from the New Jersey–based Andrew Goodman Foundation, which funds “social justice initiatives” and boasts about its “plan to mobilize the youth vote in the 2022 midterm elections.” 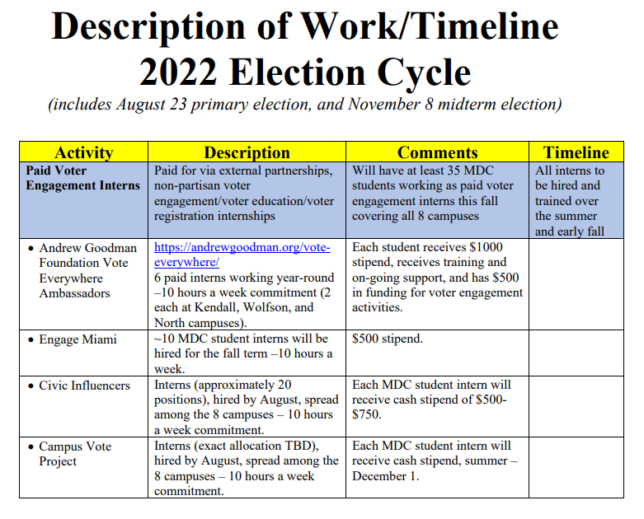 The college plans include sending faculty-wide emails “with [a] clear message re: voter registration and voter education” and voting locally, as opposed to voting in students’ home states. The college even invited activists from the far-left group Engage Miami to make “nonpartisan voter engagement presentations” in classrooms.

“Nonpartisan” is pushing it for a self-described coalition of “Gen Z, millennials, Black, Latinx, Indigenous, immigrants, women, men, queer, trans, and nonbinary” activists that offers a partisan voting guide that endorses Democrats in the 2022 midterm elections.

ALL IN is itself a front for Civic Nation, a “progressive” activist hub that runs similar initiatives such as the feminist United State of Women and Michelle Obama’s voter registration group When We All Vote. Civic Nation is listed as one of the groups working to boost turnout among women, ex-felons, and “lawfully present noncitizen New Yorkers” to create a “more just and equitable democracy” in New York.

We’ve traced grants to Civic Nation from Pierre Omidyar’s Democracy Fund, the Carnegie Corporation (a foundation despite its name), Environmental Defense Fund, and the Joyce Foundation, which once included then-Sen. Barack Obama (D-IL) on its board.

They succeeded in March 2021, when Biden signed Executive Order 14019, directing all federal departments and agencies to “protect and promote the right to vote, eliminate discrimination and other barriers to voting, and expand access to voter registration and accurate election information.”

The U.S. Constitution is clear that states, not the federal government, are responsible for running elections. States have offered easy registration services for decades, and 2020 saw the highest turnout in U.S. history—158 million voters.

Partisan operatives, however, believe that Democratic victories rely on ever-higher turnout, which is why liberal voter registration nonprofits spent $434 million in 2020 alone and Congressional Democrats included automatic voter registration in their For the People Act (H.R. 1) last year.

The goal is to make “citizen” synonymous with “registered voter,” freeing leftists to concentrate on getting out the vote.

“It’s wrong for federal agencies to use our tax dollars to engage in political campaign activities, run by left-wing organizations who target groups and areas with a high propensity to vote for Democrats,” he told Capital Research Center. “This administration is using our tax dollars to try to permanently skew elections to protect their political power.”

Is this the start of a dark new era in American history or a sign of desperation from a failing ideology? Only time—and a few more election cycles—will tell.