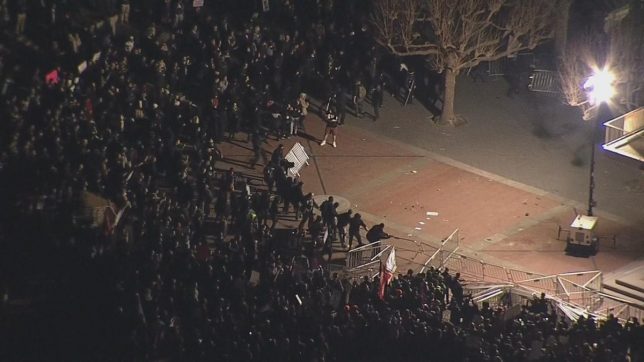 Left-wing domestic terrorism has increased at alarming rates since the 2016 election under the auspices of an underground radical movement that calls itself “Antifa,” or “anti-fascist action”. Much of this violence has been centered around Portland, Oregon, where Antifa guerrillas have assaulted peaceful demonstrators and conservative groups in the name of combating an ever-expanding definition of fascism.

In April 2017, the 82nd Avenue of Roses Business Association in Portland cancelled its annual Rose Festival and parade because it received an anonymous email allegedly from Antifa groups threatening violence if the Multnomah County Republican Party was allowed to participate in the parade. The email noted ominously: “You have seen how much power we have downtown and that the police cannot stop us from shutting down roads so please consider your decision wisely… This is nonnegotiable.”

This isn’t the first instance of fascistic action by so-called anti-fascist groups.

In Sacramento, California in June 2016, hundreds of Antifa rioters attacked 30-odd members of the white nationalist Traditional Worker’s Party (TWP). Although CRC does not support the goals of the TWP, the group had obtained a lawful permit to demonstrate when Antifa protesters violently refused to to allow the group to express its First Amendment rights. In the ensuing melee, fourteen people received stab wounds, and two were sent to the hospital in critical condition (they both survived).

After the incident, the Sacramento County District Attorney’s office filed a 2,000-page report listing 514 misdemeanors and 68 felonies involving 101 people – relating to everything from unlawful assembly to assault with a deadly weapon. Nevertheless, only three of the Antifa counter-demonstrators have been arrested. Police cite the fact that many of the counter-demonstrators wore masks as the reason for not being able to apprehend more of the assailants.

Yvette Felarca, a former middle school teacher, was one of those arrested. Felarca is a member of the radical pro-illegal immigration outfit “By Any Means Necessary,” an Antifa splinter group that participated in the February 2017 shutdown of a speech by conservative activist Milo Yiannopoulos at the University of California, Berkeley. In quintessential Stalinist fashion, Felarca argued that local business owners whose stores were vandalized by the Antifa guerrillas should direct their ire at Berkeley’s Chancellor, Nicholas Dirks, for allowing Yiannopoulos to speak in the first place – rather than the terrorists who destroyed their businesses. She further defended the blatant attack on free speech in a subsequent interview: “I was there… it was a militant protest and everyone was there to shut him down.” The Left, she argued, has been “far too timid for far too long” – which led to “someone like Donald Trump leading a fascist movement.”

The ethos unifying factor these disparate and violent Antifa groups is the belief that the Republican Party and President Donald Trump are fascist.  As Peter Beinart notes in the Atlantic, an overwhelming percentage on the American Left believe Trump is a racist. Trump’s presidency, they hold, promotes “fascist undertones” and “hateful rhetoric;” thus convinced that Trump and his supporters were raging fascists bent on the Nazification of the U.S., these largely unknown, mostly internet-based Antifa activists took to the streets to terrorize legitimate conservative opposition and shut down free speech.

The establishment Left has offered limited criticism of Antifa’s anarchist tactics, so long as the group aims its attacks at perceived white supremacists. When a masked Antifa activist punched the white supremacist Richard Spencer in the face on Inauguration Day, Slate praised the assault and the Nation called it an act of “kinetic beauty.” But Antifa has gone far beyond confining its attacks to white supremacists and fringe conservative groups. Its activists genuinely believe President Trump is a fascist and as such, vilify anyone who supports him or the Republican Party.

If Donald Trump and his supporters truly are fascists, then it only makes sense for his opponents to use “any means necessary” to stop his administration. In reality, however, the Trump’s election represents a disastrous spoke in the wheels of the radical Left’s agenda – and convinced many Left-wing anarchists that they can’t rely on the ballot box to “fundamentally transform the United States of America” as former President Barack Obama put it.

“America Under Siege: Civil War,” the first part in a series produced by Dangerous Documentaries, the film-wing of Capital Research Center, exposes the goals of organized Leftist groups to disrupt President Trump’s inauguration and presidency, and the terrorist tactics their violent foot soldiers employ to that end.

Watch the film at DangerousDocumentaries.com: