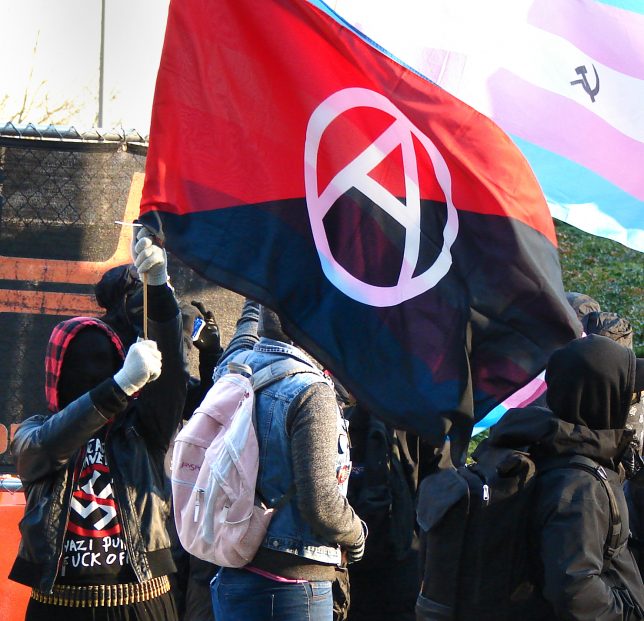 Do you think the following two facts are just a coincidence? One, local Antifa groups in the Great Lakes region successfully no-platformed Worldview Weekend’s educational conferences, planned to highlight the threat radical Islam poses to America. Two, shortly beforehand, the Southern Poverty Law Center (SPLC) highlighted the dates and times of these events on its influential “Hate Watch” blog, complete with an unflattering profile of some of the planned speakers.

The SPLC, known to the wider public as a civil rights watchdog responsible for bankrupting the Klan, now trades in smearing conservatives by associating their policy recommendations with white supremacy and Nazism.

It’s no wonder violence and the suppression of free speech seem to follow the SPLC’s spotlight. Participants in the radical Antifa (short for “anti-fascist”) movement also labels everyone they oppose—frequently conservatives or insufficiently radical liberals—as fascists. Antifa appears to be using the SPLC as a leftist thought police blotter. Groups immediately began coordinating their no-platforming campaign after reading the SPLC’s blog.

Worldview Weekend was forced to cancel four out of five planned conferences on Islam in Minnesota and Wisconsin. Organizers and hotels buckled under the pressure of threatening telephone calls and messages from left-wingers. Worldview CEO Brannon Howse said a state trooper visited one of the venues to urge his organization to provide more security—something they could not afford after incurring financial losses from the other canceled conferences.

The fifth conference, held in Des Moines, Iowa, went ahead even though leftists showed up to disrupt the proceedings, CRC contributor Jim Simpson reports in the Daily Caller.

The SPLC later reported on the disruption and silencing of two whistleblowers, John Guandolo, an ex-FBI agent, and investigator Chris Gaubatz, who were slated to speak at the conference series. The SPLC typically brands anyone who is critical of Islam as an “Islamophobe” in order to marginalize them. Worldview Weekend is a conservative Christian educational organization. Other critics of Islam, no matter how knowledgeable, have been on the receiving end of the SPLC’s campaign to purge the national dialogue of ideas that contradict the group’s preferred narrative.

Antifa and the SPLC appear to have a long-running tacit arrangement. Last December, SPLC president Richard Cohen feebly defended his group’s failure to designate ultra-violent Antifa as a hate group or movement. Antifa didn’t make the list because it “is not a group that vilifies people on the basis of race, ethnicity, religion and the like,” he claimed. Oddly enough, a group does not have to have a history of violence to be considered “hateful” by the SPLC.

Summoning the spirit of Herbert Marcuse, the Marxist father of the New Left who favored forcibly silencing non-leftists, Antifa and others on the far Left argue that “fascists” are not entitled to free speech if it constitutes “hate speech.”

This wasn’t the first time the SPLC’s misleading propaganda disguised as research has been used to hurt conservatives.

Floyd Lee Corkins II admitted he relied upon SPLC reports when he shot up the national headquarters of the Family Research Council on Aug. 15, 2012, wounding the building manager. Because the FRC opposes same-sex marriage, it was designated a “hate group” by the Center. Corkins told the FBI he planned to kill everyone in the building, and then terrorize other groups.

Last year, respected American Enterprise Institute scholar Charles Murray was mobbed by protestors at Middlebury College for simply trying to give a lecture. The violent offenders were energized by the SPLC’s profile of the noted social scientist, which describes him, falsely, as a white nationalist and eugenicist.

The SPLC does real harm when it spreads false propaganda about conservatives. When will the SPLC take responsibility for violent actors who look to it for their next list of targets?