A significant, and widening, flow of funding through legally permissible public-charity lobbying is influenced by non-charitable interests, new study finds. 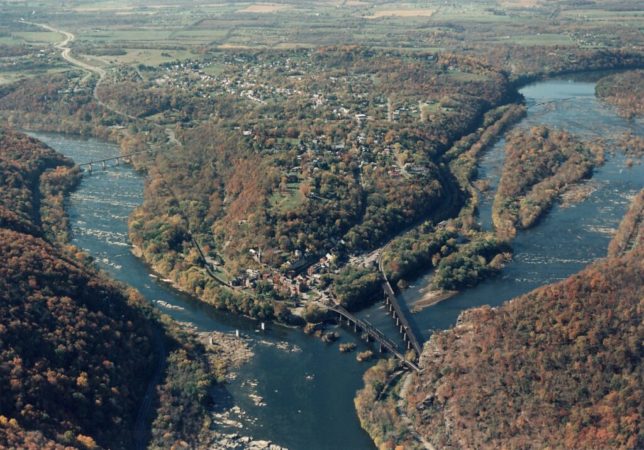 Forgive the little bit of logical circularity here, but: a nonprofit organization categorized as a “public charity” under Internal Revenue Code § 501(c)(3) is exempt from taxation because it has an explicitly stated charitable purpose and pursues charitable activities in furtherance of that purpose. And indulge the banality, but: nonprofit (c)(3) public charities are governed by boards of directors.

Consistent with their charitable purposes and as part of their charitable activities, public charities can legally engage in a certain amount of political lobbying of the government to advocate or influence policymaking, as long as that lobbying does not constitute a “substantial part” of those activities.

Three University of Florida researchers have studied whether the lobbying of public charities is influenced by boards with members who also serve on the boards of private, for-profit firms. If so, one could perhaps plausibly wonder whether the purposes being served by the charities’ lobbying are so singularly charitable or not. Given that donations to public charities are not publicly reported, moreover, one could additionally wonder, as well—as the Florida researchers to—whether there’s a stream of “dark money” flowing through public charities for what would be this non-charitable lobbying.

“Overall, the results indicate a ‘dark money’ channel where firms with directors serving on charity boards are able to influence charities to conduct political lobbying that furthers the interest of firms and their industry peers,” according to Ph.D. candidate Changhyun Ahn and finance professors Joel F. Houston  and Sehoon Kim in “Hidden in Plain Sight: The Role of Corporate Board of Directors in Public Charity Lobbying.” 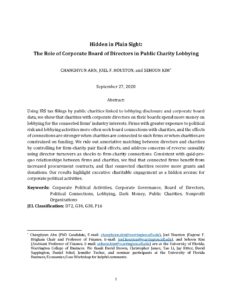 For the study, Ahn, Houston, and Kim comprehensively examined: information compiled from pulobbylicly available Form 990s that charities have to file with the Internal Revenue Service, which includes board members’ names; available biographical information about the directors of publicly traded U.S. firms; and the publicly reported activities of registered federal lobbyists and their clients. Their study period was from 1999 through 2017.

The Florida researchers found 3,871 charities and 5,433 firms that shared a director at some point during the period. Eight hundred forty-three of the charities conducted lobbying activity. These lobbying charities annually spent, on average, $22,500 for the connected firm’s industry interest. More charities lobbied over time, they report, and the annual amount spent by charities on “lobbying for issues of connected industry interests has nearly doubled over the past decade.”

Ahn, Houston, and Kim consider the alternative explanation that particular charities would seek and find, and individuals would be more willing to serve as, board members of the charity because of their pre-existing shared interests in pursuing the same particular charitable purpose, including through lobbying. Alas, they report, “we find no evidence lending support to the alternative explanation that the effects might be driven by selection biases from assortative matching between charities and directors with predetermined preferences.”

The researchers also conclude that “the impact of firm-charity board connections on the charity’s tendency to lobby for the connected firm’s industry interest can be explained both by the demand for political insurance by firms exposed to political risk, and the demand for access to funding networks by public charities.”

If “Hidden in Plain Sight” is right and public-charity lobbying is a “dark-money” tributary—however legally permissible—then those who want to aggressively protect and defend the “soul” of the charitable sector would sure seem to have a little bit more evidence to cite in their argument against defenders of its status quo.

(Another hat tip to National Affairs’s great daily “Findings” page put together by Kevin Lewis, who included the “Hidden in Plain Sight” paper in a recent compilation.)

This article first appeared in the Giving Review on October 30, 2020.