In philanthropy, for example, personal giving almost doubled from 1929 to 1964, then turned back downward from 1964 to 1996, according to new book by Robert D. Putnam with Shaylyn Romney Garrett. What to do about all this? Where to turn? 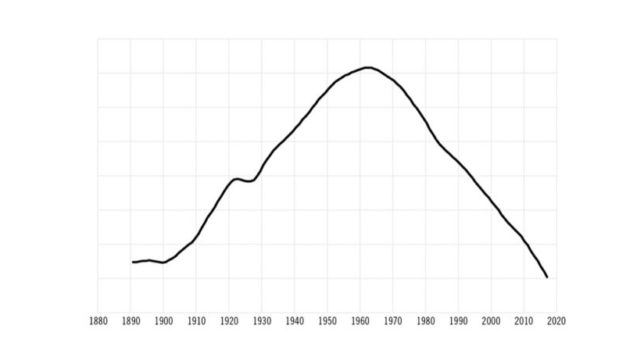 “Community vs. Individualism in America,” Figure 1.2 in The Upswing: How America Came Together a Century Ago and How We Can Do It Again.
by Michael E. Hartmann

Harvard University political scientist Robert D. Putnam’s new book The Upswing: How America Came Together a Century Ago and How We Can Do It Again, written with Shaylyn Romney Garrett, statistically tracks meta-historical trends that brought the U.S. from an individualistic to a communitarian society, and then back again. It is descriptive and prescriptive, ending by offering some lessons in how to try unifying ourselves again. 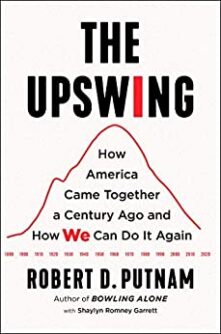 “[T]he state of America today must be understood by first acknowledging that within living memory, each of the adverse trends we now see was going in the opposite direction,” according to Putnam and Garrett. They

show that, to a surprising degree, century-long trends in economics, politics, society, and culture are remarkably similar, such that it is possible to summarize all of them in a single phenomenon: The story of the American experiment in the twentieth century is one of a long upswing toward increasing solidarity, followed by a steep downturn into increasing individualism. From “I” to “we,” and back again to “I.”

The Upswing’s traced trends include philanthropy—specifically including an upswing in personal giving, followed by a disheartening downswing. “Imperfect but comprehensive records of all nationwide personal giving … as a fraction of national income show a classic inverted U-curve, rising steadily and nearly doubling from 1929  to 1964 but then turning back downward from 1964 to 1996,” Putnam and Garrett write. Putnam authored 2000’s well-received and influential Bowling Alone: The Collapse and Revival of American Community.

Citing a total of nine sources in two endnotes, they continue,

For a decade between 1996 and 2005, total national philanthropy unexpectedly shot upward by nearly one third, only to fall back equally sharply in the following decade. This temporary spurt in generosity puzzled experts for some years, but further investigation showed that it was driven entirely by megagifts during the boom years from the mid-1990s to the Great Recession, while the rate of giving in the population as a whole continued to fall. Measures of the “average” gift were pulled way up by a few high outliers. By contrast, giving to United Way, the largest single charity in America and one focused almost entirely on small gifts, fell uninterruptedly in the nearly six decades between 1961 and 2017, with no evidence whatsoever of an increase in the 1996-2005 boom years. In short, philanthropy among most Americans has fallen steadily since the mid-1960s, only partially and temporarily offset by megagifts from the newly mega-rich.

This is exactly what happened in the previous Gilded Age, as Rockefeller, Andrew Carnegie, and some of their peers, immensely rich as a by-product of the massive increase in inequality, doled out megagifts. It may seem hard to be critical of the generosity of Bill Gates, Warren Buffett, and Mark Zuckerberg, but their personal charity shouldn’t conceal the metastasizing self-centeredness among middle-class Americans since the peak of our generosity in the 1960s. [Endnotes omitted.]

Putnam and Garrett believe progressivism provided a healthy breeding ground for America’s civic activity, including as expressed by personal giving in the philanthropic context. Progressives had “a compelling desire to repudiate the downward drift of our nation, and a galvanizing belief in the power of ordinary citizens to do so,” they write.

This might well fit their Upswing timeline; progressivism was, in fact, ascendant in America—including in its government, in its public policies, and among its well-credentialed elites—from the 1930s to the 1960s, when the “I” became “we” in their argument.

But progressivism didn’t just stop in the 1960s, when the “we” lamentingly began to go back to “I” again. In fact, progressivism ascended even further beginning in the ’60s—in an even faster-growing government and its bureaucratically implemented and enforced policies, as others’ timelines reflect, and among elites with their own compelling desire to repudiate what they considered the downward drift of our nation.

There’s also another serious relevant tension in The Upswing’s historical analysis, and not as easily elidable—essentially, between Tocqueville and progressivism. More of those wanting, and working, to effect another upswing in the measures of America’s economic, political, social, and cultural well-being—including in philanthropy—should turn to Tocqueville and his observations about a thriving civil society rather than the now clearly ascendant progressivism. Including in philanthropy, where it’s actually close to achieving outright predominance.

This article first appeared in the Giving Review on November 2, 2020.