But too many still support the violent hate group Antifa

A new public opinion survey conducted by McLaughlin and Associates reveals wide support among Americans for constitutional free speech over attempts to silence potentially “offensive” opinions. The revelation comes in the aftermath of the violence in Charlottesville, Virginia in August, in which Antifa belligerents clashed with other extremists during a lawful protest, resulting in one woman’s murder.

Despite calls for censorship of what many on the Left consider “hate speech,” 85 percent of respondents agreed with the statement that “all Americans are entitled to free speech,” not “just some of us.” A nearly identical number (84.9 percent) regard “freedom of speech as a fundamental right,” while only 9.3 percent hold that “it should be restricted if it offends some people.”

Worryingly, however, are the poll’s findings on Antifa, or “anti-fascist action”—a far-left network of anarchic terrorists responsible for attacks on conservative and mainstream groups across the country. While 63 percent of respondents oppose Antifa in the wake of the bloodshed in Charlottesville, 21 percent voiced their support for the group. Broken down demographically, support for Antifa was both strongest and most divided among self-identified liberals—42 percent in support, 44 percent opposed. Support was weakest among self-identified moderates (60 percent oppose) and conservatives (80 percent opposed).

Many prominent figures on the Left have refused to denounce Antifa – even after the Department of Homeland Security labeled their activities “domestic terrorist violence.” Some have even endorsed the movement, such as radical activist Shaun King, a vocal supporter of Black Lives Matter. As CRC’s Jake Klein notes,

Mainstream figures endorsing AntiFa potentially represents a major turning point towards the acceptability of political violence. While it’s true that AntiFa fought against violent white supremacists in Charlottesville, most previous violence from them has been directed against much more moderate figures. 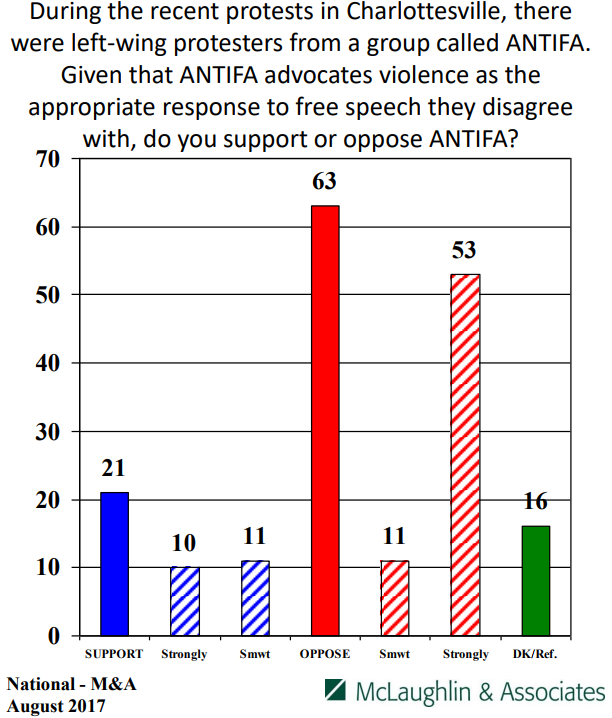 The survey also finds that a plurality of Americans (42.8 percent) oppose Internet companies’ use of a “hate group” list compiled by the Southern Poverty Law Center (SPLC), compared to 31.8 percent who support it.

Founded to combat true hate groups like the Ku Klux Klan and neo-Nazis, the George Soros-funded SPLC has since turned its focus on aggressively targeting mainstream charities which disagree with its extreme ideology. By labelling organizations such as the Family Research Council—a Christian pro-life nonprofit—“hate groups,” the SPLC smears and censors legitimate outlets.

The SPLC’s slurs even inspired a gunman to storm the Family Research Council’s Washington, D.C. headquarters in August 2012, where he opened fire on employees. During an interview with the FBI, the shooter, Floyd Lee Corkins, stated:

I wanted to kill the people in the building and then smear a Chick-fil-A sandwich in their face … to kill as many people as I could.

Social scientist Charles Murray has also been a victim of SPLC-inspired violence. Earlier this year, Murray was assaulted by leftist students during a speech he gave at Middlebury College. Murray, who has been accused by the SPLC of promoting “racist pseudoscience” and white supremacism, was attacked by mask-wearing terrorists who decried his political views on the white working class. The students went so far as to grab the hair and twist the neck of the liberal professor, Allison Stanger, who attempted to shield Murray. Stanger was sent to the hospital for a neck brace.

For more on the Southern Poverty Law Center, which CRC has called a “wellspring of manufactured hate,” see our full report—and catch CRC president Scott Walter’s interview with FOX News.

An op-ed by CRC Board of Directors Member Edwin Meese III is available to read here.

Watch our short video on how the SPLC lost its way and became a hate group itself here: