“America Under Siege: Antifa” in the News 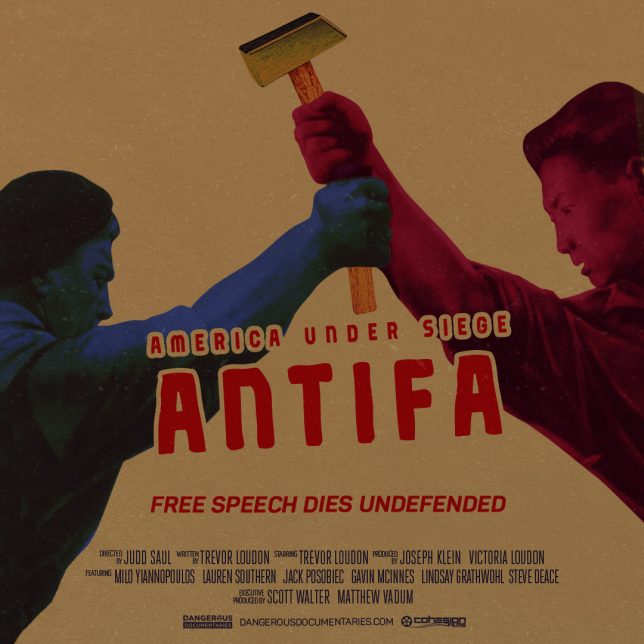 “When America begins to normalize political violence, Dangerous Documentaries takes a stand. Creating documentaries with traditional movie studio quality, while offering their educational films on YouTube, Facebook and their website for all to see.”

On September 25, Dangerous Documentaries (a project of Capital Research Center) and Cohesion Films released “America Under Siege: Antifa” a new documentary which exposes the real history—communistic and violent—of the modern day anti-fascist movement.

This is the film that Antifa tried to shut down. The radical group threatened violence prior to “Free Speech Week” (Sept 25-28) at UC Berkeley, which contributed to the school’s decision to cancel the event.

In response, Dangerous Documentaries released the film online for free via YouTube and Facebook and One America News Network premiered the film on television. Not surprisingly this timely piece has garnered a ton of press:

The Daily Caller reports, “The documentary… explores the violent threats of the far-left, extremist movement known as Antifa.”

Paul Bond of The Hollywood Reporter says, “Antifa…whose name is derived from the anti-fascist movement, are the subject of a documentary film that is none too kind to them.”

“film represents the most in-depth look yet at America’s most infamous modern-day movement and its disturbing impact on American society.”

In a second article for The Daily Caller, Liam Clancy reports, “The documentary…details the goals and origins of the shadowy ‘anti-fascist’ group that…continues to assault those on the right and innocent bystanders alike.”

“Antifa promotes a blend of anarchy and communism, and was formed in 1920s Germany as the violence and intimidation wing of the Communist Party of Germany (KPD).”

Conservative Firing Line expands on the film’s cast saying, “With help from those who have encountered Antifa head-on including Milo Yiannopoulos, Gavin McInnes, Lauren Southern, Jack Posobiec, and Steve Deace, conservative author Trevor Loudon guides us through the history and ideas behind the Antifa movement.”

The Long Room commends Loudon for “guid[ing] us through the history and ideas behind the Antifa movement, starting with Leon Trotsky and going all the way through the events in Berkeley, CA and Charlottesville, VA.”

“For more than 30 years, [Loudon] has researched radical left, Marxist and terrorist movements and their covert influence on mainstream politics.”

All News Pipeline praises the film’s writer saying, “Loudon does an outstanding job of documenting not only the history of Antifa, but the rise of the group whose activities have been labeled ‘domestic terror’ by the FBI and DHS, here in America.”

Trey Sanchez of Truth Revolt adds, “Loudon’s impeccable research…tells it all. The Antifa’s goal is clear: They are totalitarian communists and will stop at nothing in the name of their agenda.”

Newsline reports, the “new documentary looks at the Antifa movement…and concludes that the group stands for what it claims to oppose.”

Campus Reform observes, “The threat of violence from Antifa has resulted in the cancellation of a film premiere set to expose that very same organization.”

Writing for Allenbwest.com, Matt Palumbo says, “As always is the case, the film will garner more views now than had Antifa not successfully shut it down in the first place.”

“Trevor Loudon and Dangerous Documentaries have put together one of the most riveting and exciting political documentaries of the year, and one that was most needed.”

“Antifa” is the third film in the series “America Under Siege.” Each documentary investigates an aspect of the Marxist Left’s assault on the United States and individual liberty (watch “Civil War 2017” and “Soviet Islam” here). With help from those who have encountered Antifa (or “anti-fascist action”) firsthand—including Milo Yiannopolous, Gavin McInness, Lauren Southern, Jack Posobiec, and Steve Deace—Capital Research Center partners with Trevor Loudon partner to uncover the movement’s historical origins.

“Antifa” aired on September 26th at One America News Network, and can be streamed for free online at Dangerous Documentaries and our YouTube channel: