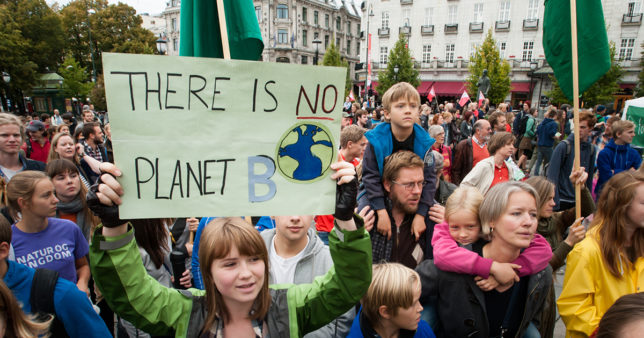 “Climate change is one of those most severe threats. This is not just a problem for countries on the coasts or certain regions of the world. Climate change will impact every country on the planet. No country is immune.”

Those are President Obama’s words, which have long carried a strong dose of alarmism. Now the Obama administration is directing the U.S. military to incorporate the imagined consequences of climate change—an “immediate risk to our national security”—into every level of its operations.

But is climate change really that scary? The temperature has risen an estimated 0.8 degrees over the last 150 years. Greenhouse gases make up no more than two percent of the earth’s atmosphere—and of that two percent, 95 percent of it is water. Carbon dioxide—the most controversial greenhouse gas—makes up roughly 1/2,500th of the atmosphere and is exhaled naturally by human beings and other animals.

Meanwhile, ISIS funds itself by selling about $40 million worth of oil per month—regardless of the potential environmental impact of its activities. Since the end of 2015, the terrorist organization has earned $500 million in oil sales and $1.5 billion in Iraqi and Syrian bank lootings, in addition to “many millions more” extorted from people under its control.

And climate change alarmism has gotten in the way of America’s anti-ISIS campaign. “We didn’t go after oil wells—actually hitting oil wells that ISIS controls because we didn’t want to do environmental damage, and we didn’t want to destroy that infrastructure,” former CIA deputy director Michael Morell recently told Charlie Rose in a PBS interview.

The U.S. has its priorities seriously mixed up.

For more, you can read the May edition of “Green Watch” here.

This blog post was adapted from the May edition of Capital Research Center’s “Green Watch,” by Steven J. Allen.