A New Policy Agenda for the “Regressive Resistance”: What Happened to Civil Liberties? 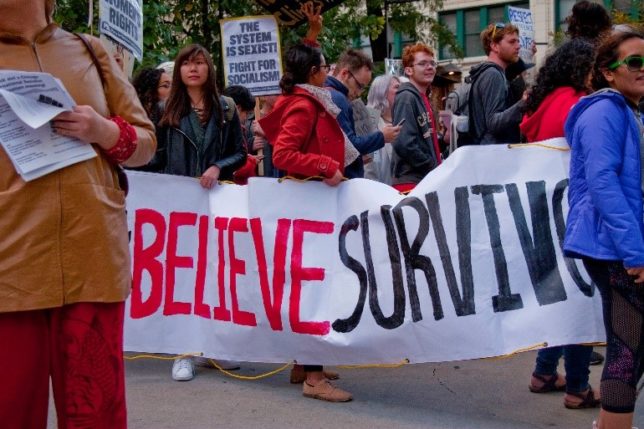 Democrats and liberals have become so blinded by partisanship that they are even targeting the parts of the Constitution that they used to like. Intersectionality and progressive identity-group politics have made due process a target for the feminist Left and gun-control activists. This targets Americans’ rights under the Fifth, Sixth, and Fourteenth Amendments—rights the Left once supported.

The campaigns to reinstate the Obama administration’s campus kangaroo courts and to strip gun rights from individuals on the secret “terrorist watchlist” go directly against the old-line-liberal legacy of due process protections extended by the very liberal Warren Court through the 1950s and 1960s. They were established by famous decisions like Miranda v. Arizona, requiring a defendant to be informed of his rights not to incriminate himself and to seek legal counsel; Gideon v. Wainwright, requiring states to provide indigent accused with publicly funded legal representation; and Mapp v. Ohio, excluding illegally obtained evidence from consideration at trial.

But in recent years, Democrats and the Left have seen these rights as procedural barriers to broader “social justice,” and they have made efforts to cast them aside in the service of their political agendas.

In 2018, the American Civil Liberties Union rejected civil liberties, sacrificing the purpose outlined in its name on the altar of the progressive ideology of intersectionality. It instead swore fealty to the feminist Left, prioritizing identity politics above its historical advocacy for the rights of the accused.

Secretary of Education Betsy DeVos released a notice of formal rulemaking to override Obama-era guidance on the handling of sexual misconduct allegations by colleges receiving federal funds (in practice, nearly every single college) under Title IX. The new rules make the definition of sexual misconduct less vague, require colleges to allow cross examination, and allow universities to set a higher evidentiary standard than the “preponderance of the evidence” standard (in theory, a better than 50/50 chance the accused is guilty) required by the Obama-era guidance.

And what was the ACLU’s response? A tweet attacking the proposed rulemaking, claiming the changes “promote an unfair process, inappropriately favoring the accused” (emphasis added). The American Civil Liberties Union declared that establishing a clear and distinct threshold for misconduct, setting an evidentiary standard worthy of the gravity of the charges and the penalties under consideration, and allowing an accused’s representative to cross-examine the accuser—a fundamental element of “due process of law” without which the state shall not deprive any person of “life, liberty or property” under the Fourteenth Amendment—somehow “inappropriately” favors the defendant.

That the ACLU felt it necessary to commit itself to the Obama-era Title IX guidance at the expense of its commitment to civil liberties shows the power of the radically ascendant faction of intersectional feminists in the left-wing coalition. No longer is it enough for the ACLU to favor abortion-on-demand (a longstanding position for the group); the ACLU must take stances in opposition to its longstanding advocacy record to support the progressive party line.

It is no secret that the Democratic Party and the progressive Left would love to see the Second Amendment gutted. Progressives erroneously see its guarantee of a citizen’s right to keep and bear arms as a direct threat to public safety. However, in their campaign to target these rights, progressives are prepared to throw away other rights of due process by conditioning gun rights on citizens’ non-inclusion on a secret government list.

That secret government list is the so-called Terrorism Watch List, a secret list of anywhere from 680,000 people to 1.5 million people supposedly connected to terrorist activities—280,000 of whom had “no recognized terrorist group affiliation,” according to a 2014 leak from within the U.S. intelligence community. In a fit of memory of its supposed principles, the ACLU notes that the present watch list is not “consistent with the presumption of innocence and the right to due process.”

But, eyeing a popular-sounding slogan and conflating the “no-fly list” (itself an abomination to due process, though one affecting far fewer people) with the terrorism watch list, Democratic Senators and presidential hopefuls like Kirsten Gillibrand and Cory Booker have called for stripping Second Amendment rights from Americans based on their appearance on the list.

Getting off the list (should one have the unpleasant experience of discovering that one is on it—the names on it are secret) is a Kafkaesque nightmare; there is no provision for due process for those listed to clear their names or show that they were misidentified. There is also no due process to determine who is listed in the first place. As Gabriel Malor, a pseudonymous lawyer from Virginia, wrote in 2016:

In due process terms, these lists and their administration lack notice, an opportunity to respond, and finality. The government is not obligated to inform you that you’ve been put on these lists and consequently stripped of some of your rights. Your ability to challenge your inclusion—should you even find out, of course—is also limited. Further, there are no rules in place to prevent a nameless and unknowable government bureaucrat from putting you back on either list even if you do successfully challenge them.

And in 2016, in the wake of the terrorist-inspired spree shooting at Pulse nightclub in Orlando, when Democrats made the “no-fly-no-buy” gun-control measure a centerpiece of their legislative program, Republicans offered to accept it on one condition: The government would create due-process protections for Americans on the list. The Democrats rejected the compromise, with Sen. Chris Murphy of Connecticut, an arch-gun-controller, caviling that “Republicans have decided to sell weapons to ISIS,” a position endorsed by Obama White House Press Secretary Josh Earnest.

The callous disregard of requirements of due process in both the gun-ban-list and the campus kangaroo court cases shows how far the new progressives are willing to go—even to the extent of casting aside past generations of liberals’ victories.

There are many things that make the United States a unique country. Certainly, there are magnificent natural features, but the elements of America that make it singular and precious are not physical traits, but the ideas enshrined in our institutions. One of the most beautiful considerations written into the Constitution is the acknowledgement that it is not perfectly comprehensive. The Ninth Amendment admits that the Constitution doesn’t contain all the rights endowed in humankind. This oft-forgotten Amendment leaves open a single important question for Americans: Will this generation of Americans successfully preserve liberty for the next generation?

In laying out their course of illiberal progressivism the Regressive Resistance, the Left 3.0—whatever term historians settle on—is ready to sacrifice the rights enjoyed by Americans and enumerated in the Constitution, if it means they have a chance to reorder the world.

Some unenumerated rights, such as the right to travel, to opt out of public school, or to make certain medical decisions frequently come under attack from unexpected corners. Those unenumerated rights the Founders were wise enough to consider and protect will fare just as poorly under the Left’s regressive agenda. Those who prize liberty, individual responsibility, and limited government might consider using some of the Left’s strategies and tactics—tempered with the optimism of centrists and conservatism—to revitalize our own institutions in order to make the case for an America that cherishes its citizens’ rights as much as it cherishes government action.