A New Policy Agenda for the “Regressive Resistance”: The Trouble of Voting 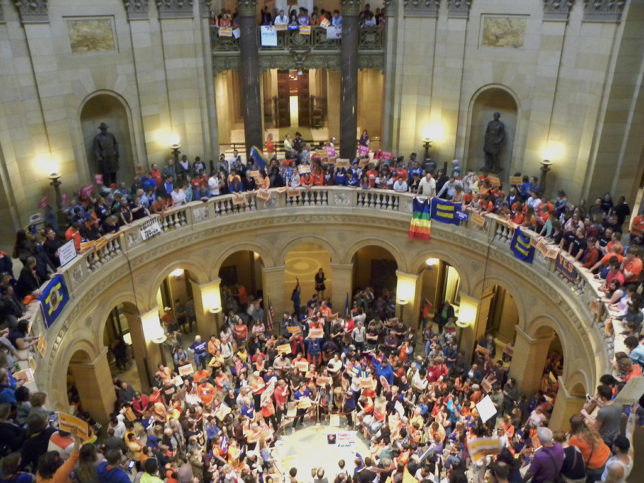 The “For the People Act” doesn’t stop at violating the First Amendment. Less publicized but still extremely detrimental provisions would change how states hold elections. It would take powers delegated to the states in Article 1 of the Constitution and mandate early voting, automatic voter registration, same-day registration, online voter registration, and no-fault absentee balloting. While there are legitimate concerns about low civic engagement that might be addressed by automatic voter registration or making Election Day a national holiday, other items like online voter registration or same-day registration are ripe for fraud and abuse. Democrats also appear to treat voter-roll integrity very cavalierly; H.R. 1 would prevent election officials from maintaining clean voter rolls or purging inactive voters from the rolls. The law would also unilaterally wipe away state voter-ID laws by allowing individuals to sign a statement affirming their identity.

Siphoning power from the states regarding how they hold elections is one thing. But H.R. 1’s proposal to reform redistricting takes it a step further. Redistricting is an inherently political process necessary to electing members of the House of Representatives; it also is a power specifically delegated to states in Article 1, Section 2, of the Constitution. H.R. 1 is just a continuation of a years-long plan to turn red states purple, and purple states blue.

Democrats were almost powerless during the 2011 redistricting process. While Democrats focused on controlling the federal government in 2010 midterm elections, Republicans won impressive majorities in statehouses and gained control over governors’ mansions across the country. By losing influence in state politics, Republicans were able draw congressional districts with little to no opposition.

Since state politicians have the chance to redraw district maps only once a decade, Democrats needed a new strategy if they were going to be competitive in the House of Representatives. President Barack Obama, former Attorney General Eric Holder, and the Left’s go-to lawyer Marc Elias embarked on an ingenious plan to redraw America’s political maps.

Democrats targeted states like Virginia, North Carolina, and Pennsylvania for lawsuits under the Voting Rights Act. A handful of these lawsuits saw district maps thrown out. Some of these maps were replaced with maps drawn by court-appointed redistricting experts or “independent” redistricting commissions—circumventing state legislatures entirely.

Judicial intervention in redistricting arguably undermines the separation of powers. After all, Congress is allowed to change the way its members are selected, but it’s inappropriate for the judiciary to take a hand in the process beyond determining if maps are legal or if they unfairly disenfranchise voters.

H.R. 1 attempts to ram wholesale redistricting reform through Congress by mandating all states appoint so-called “independent redistricting commissions” to draw the maps. The “independence” of such commissions is up for debate and the number of considerations such a process demands (creating compact and contiguous districts, maintaining communities of interest, etc.) will still result in disputes. However, unlike elected politicians, they are not directly accountable to voters. They cannot be voted out of office the way elected officials can.

It’s true. Americans don’t really cast votes for the President on Election Day. One tautological reason for this is because the United States is a democratic republic—not a pure democracy. Instead of directly voting for the chief executive, states hold winner-take-all elections to see which “electors” will cast votes on behalf of the entire state. (Maine and Nebraska are the exceptions. They award electoral votes by Congressional district.) This system can—and does—result in a candidate winning the electoral vote and losing the direct popular vote.

There are lots of good reasons for using this mechanism to elect a president. The first of which is that without the Electoral College, dozens of states and communities simply “wouldn’t matter.” Winning the popular vote in New York, California, and Illinois, with their densely populated metropolitan areas, would suffice to win an election. Surely America’s breadbasket and less-populous regions deserve to have a say in their government, right?

Apparently not. A growing movement of left-wing populists would happily disenfranchise vast swaths of the country in order to ensure that a Democrat sits in the White House. It’s no longer a fringe idea. Recently, former Attorney General and chair of the National Democratic Redistricting Committee Eric Holder suggested the Electoral College was undemocratic and ought to be abolished. Long-shot 2020 Presidential candidate Pete Buttigieg from South Bend, Indiana, also called for the body’s elimination.

Left-wing nonprofit groups like National Popular Vote and FairVote lobby states to adopt the “National Popular Vote Interstate Compact.” This dubious compact attempts to remedy the difference between popular vote and the electoral vote by having states pledge that their electors will cast votes for the candidate that wins the popular vote. Of course, electors are only pledged, not legally obliged to cast their votes to certain candidates. American history is dotted with instances of “faithless electors,” who for one reason or another, voted contrary to their pledge.

The compact, which is riddled with possible constitutional violations, only comes into effect when states representing 181 electoral votes sign on. So far, governors in 11 states and the District of Columbia have agreed to sidestep the Electoral College.

When progressives complain about the Electoral College, they neglect a very important feature of the United States—the Executive is only one-third of the government. Our bicameral legislature does, in some ways, account for popular vote. Americans elect members of the U.S. House of Representatives with a winner-take-all election by congressional district. Districts are apportioned by population. The result is that California sends 53 representatives to the House. In keeping with California’s traditional left-wing streak, only seven of those members are Republican. This gives Democrats a huge advantage in the House of Representatives and creates a serious counterweight to check the Executive.

Of course, radically progressive liberals point out that the Senate is not apportioned this way. As established by Article 1, Section 3, of the Constitution, every state—regardless of population—is entitled to two senators. Unhappy with this particular check on direct democracy, the most-illiberal voices of the progressive Left such as ThinkProgress, Vox, and Jacobin, suggest abolishing the Senate altogether.

The Left—especially the Regressive Resistance—shows its hand with these suggestions. The Senate and the Electoral College are premised on the idea that all the states in the union are equally important. It’s a central American ideal that binds the country together. For a movement obsessed with “equality,” the Left seems oblivious to their fellow Americans in low-population states.

In the next installment of A New Policy Agenda for the New Left, learn about an old idea the Regressive Resistance want to resuscitate.