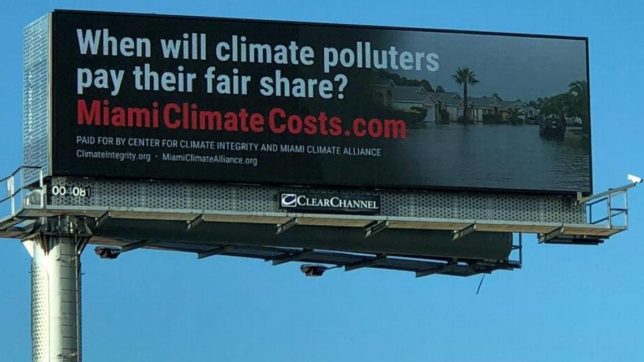 The Center for Climate Integrity partnered with Miami Climate Alliance to buy five billboard signs around Miami to argue that oil and gas companies should be liable for climate change. Credit: Miami Herald.
by Robert Stilson

The practical impacts of climate change—and how to finance any necessary mitigations to those impacts—are political issues that invoke a spectrum of views and competing concerns, many of which have international implications. In our system of government, such issues are properly worked out through the political process by elected officials and administrations.

Some environmental activists, frustrated by the lack of progress on their priorities through that process, are instead attempting to sidestep the political process by turning to the courts. One strategy involves harnessing the power of sympathetic state, local, and potentially federal governmental entities to extract billions of dollars in damages from Big Oil for its allegedly tortious role in bringing about climate change.

The Center for Climate Integrity

Illustrative of the groups facilitating this approach is an organization called the Center for Climate Integrity (CCI). It’s one of a number of activist groups working nationwide to support litigation targeting energy producers. According to its website, CCI “helps cities and states across the country hold corporate polluters accountable for the massive impacts of climate change.” It encourages, supports, and tracks lawsuits filed by governmental entities against major energy companies. The central contention is basically that the defendant companies knew that burning fossil fuels contributed to climate change, took steps to downplay this information, and should now be financially liable.

Launched in 2017, CCI is actually a project of the Institute for Governance and Sustainable Development (IGSD), a 501(c)(3) nonprofit whose most recent tax filings reveal revenues of approximately $11.2 million. CCI, in turn, operates several projects of its own. One supports “legal action and policy change” forcing “climate polluters” to pay for costs related to “climate impacts.” Another estimates that $400 billion is necessary to combat sea-level rise—and an accompanying report admits this number reflects only “perhaps 10 to 15 percent” of total costs. Yet another project serves as a network of almost 70 elected officials who support its efforts.

Because CCI is an “initiative” of IGSD, rather than a standalone nonprofit, its finances can be difficult to pin down. Major funding appears to have come from the Children’s Investment Fund Foundation, an international foundation established by British billionaire Christopher Hohn. It paid out $7 million in grants to CCI between January 2018 and September 2020 in order to support “litigation that promotes climate mitigation, adaptation and resilience.”

In 2019, the MacArthur Foundation gave $500,000 to CCI in order to “develop a multi-state campaign that provides strategic communications support for climate litigation.” The Rockefeller Family Fund—one of the charities established by the famous oil money family—gave IGSD over $1 million in 2017 ($120,000 of which was earmarked for CCI and $900,000 for “climate education & litigation” more broadly) and over $2.1 million in 2018 (all of which was specifically designated for CCI).

Wrong Place for the Wrong Arguments

A status tracker published by CCI currently lists 20 cases against “climate polluters,” almost exclusively brought by state and local governments, though CCI’s specific role in all of these cases is unclear. So far these kinds of lawsuits have been uniformly unsuccessful when heard on their merits. Most recently, in April 2021, the U.S. Court of Appeals for the Second Circuit affirmed the dismissal of New York City’s suit against five major oil companies.

That opinion, alongside U.S. District Judge William Alsup’s 2018 dismissal order in City of Oakland v. BP P.L.C. (a case that is still being litigated) provide some of the more detailed judicial discussions of the fundamental problems with attempting to hold Big Oil liable for climate change. While acknowledging that “[a]ll parties agree that fossil fuels have led to global warming,” Judge Alsup noted that plaintiffs’ “breathtaking” theory rested “on the sweeping proposition that otherwise lawful and everyday sales of fossil fuels, combined with an awareness that greenhouse gas emissions lead to increased global temperatures, constitute a public nuisance.”

It cannot be overemphasized that humanity’s entire modern standard of living has been built on coal, petroleum, and natural gas. It defies any notion of justice or logic to entertain the idea that businesses that provided these fully legal and universally demanded products to consumers (public and private) should now be held liable because those consumers actually used the products. Judge Alsup observed quite correctly that “our industrial revolution and the development of our modern world has literally been fueled by oil and coal. . . . Is it really fair, in light of those benefits, to say that the sale of fossil fuels was unreasonable?” Of course, it’s not fair.

Now, it is entirely reasonable to advocate reducing emissions for the sake of our climate and environment. But because every policy that would meaningfully do so would necessarily impact the lives of ordinary people around the world, ordinary people should have their say in those policies after considering important arguments about the relevant science, uncertainties, tradeoffs, and costs. In our system of government, this means the democratically accountable legislative and executive branches, not the judicial branch, decide such matters. These lawsuits simply seek to bypass that inconvenient process.

An equally troubling concern arising from this sort of litigation is the role that private activist groups appear to be playing in influencing public bodies to target businesses that those activist groups don’t like.

For example, the lawsuit filed in 2020 by the city of Hoboken, New Jersey, against Exxon Mobil and “other Big Oil companies” seeks “hundreds of millions of dollars to compensate the City for past, current and future costs associated with climate change adaptation, remediation, and economic losses.” The city government boasted that the suit would cost taxpayers nothing because IGSD (CCI’s parent nonprofit) was covering part of the legal fees and because of the city’s contingency fee arrangement with the attorneys. After the filing was announced, IGSD/CCI almost immediately financed and recruited signatories for a pressure campaign urging New Jersey Gov. Phil Murphy to file suit on behalf of the entire state.

Public records requests from transparency groups like Energy Policy Advocates have shed light on similar dynamics playing out in other localities. The city of Baltimore sued 26 “members of the fossil fuel industry” back in 2018. According to the public interest law firm Government Accountability & Oversight, P.C., both CCI and the Union of Concerned Scientists (UCS) apparently played a role in encouraging that suit. The specifics of this relationship have been withheld by the city—a withholding that is the subject of ongoing litigation. Both CCI and UCS signed an amicus brief supporting the city in the Fourth Circuit. IGSD and CCI were also reportedly among the activist groups that unsuccessfully tried to lobby the city of Fort Lauderdale on pursuing similar litigation. Anne Arundel County, Maryland, is the latest locality to sue.

What is problematic should be clear: Privately funded activist groups are lobbying for and supporting dubious lawsuits brought by governmental institutions against companies that produce products the activist groups oppose. Public records that have been released also suggest that these governments are at least partly enticed by the prospect of using the courts to extract “new streams of revenue to address climate change” from businesses.

Even if every one of these cases ends up dismissed, the way they are being brought is troubling in and of itself. It fits squarely within a disconcerting pattern, exposed most prominently by Christopher C. Horner for the Competitive Enterprise Institute, of activist groups and wealthy donors attempting to harness the power of government “to attain a policy agenda that failed through the democratic process.”

The wisdom and necessity of adopting any given measures to mitigate the current and future impacts of climate change—and who should pay for those measures—is a political debate properly informed by scientific, budgetary, and practical concerns. It’s also a debate with local, national, and international implications. Activist group–backed government lawsuits against energy producers seek to preempt this debate under an entirely unjust and impractical theory of liability. The American people and their elected representatives should follow the lead of the courts that have considered such suits and reject them.