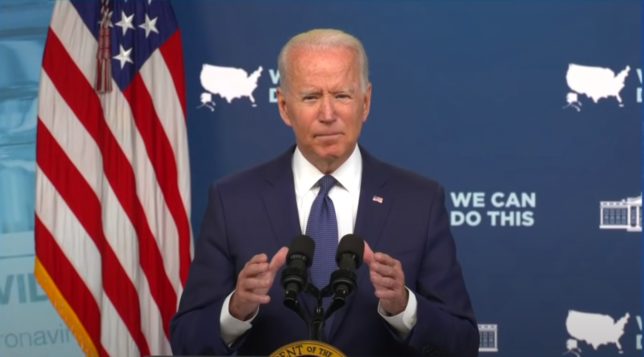 Action NC is a left-leaning nonprofit that is helping President Joseph Biden vaccinate North Carolina. What began as door-to-door outreach and education on the COVID-19 vaccine has turned into a manufactured grassroots campaign to vaccinate adults in North Carolina. Action NC even gives out bribes incentives in the form of $25 gift cards to individuals who decide to get vaccinated on their own doorstep.

Who Is Action NC?

Action NC’s stated mission is to “reduce the root causes of poverty . . . and inequality” in the United States by organizing individuals from “poor and working-income communities.” Without dressing up its motives just to look nice on paper, Action NC involves itself in opposing election integrity reforms and decreasing regulations on illegal immigration.

Action NC and the Left

In 2013, a Blueprint NC memo detailing plans to attack Republican elected officials was leaked. The memo included plans to cripple Republican leaders, “eviscerate [Republican] leadership and weaken their ability to govern,” “pressure [Gov.] McCrory at every public event,” “slam him” whenever he contradicts a campaign promise, and employ “private investigating and investigative journalism, especially in the executive branch.” Yet many of the members in Blueprint NC are 501(c)(3) nonprofits and are not allowed to engage in any political campaigns or make any verbal or written statements in opposition to any candidate or political official.

When it was still an active organization, the Association of Community Organizations for Reform Now (ACORN) had the same executive director (Pat McCoy) and mission statement as Action NC does today. Action NC spokesman Kevin Rogers claimed that Action NC is not a reincarnation of ACORN, although no one would expect Action NC to confess its relation to the scandal-ridden ACORN.

Action NC is following in its predecessor’s footsteps by bringing COVID-19 vaccines door-to-door to help reach President Biden’s “70 percent vaccinated” goal, which he announced earlier this summer. Biden said that the plan was to “to go to community by community, neighborhood by neighborhood, and often door to door—literally knocking on doors—to get help to the remaining people.”

At first, Action NC answered the president’s call by going door-to-door to spread information on the vaccine and convince unvaccinated adults to get vaccinated at their local pharmacy or vaccine distributor. Action NC has knocked on more than 30,000 doors in North Carolina since its campaign started in May.  When that campaign was not successful enough, Action NC began administering vaccines at the door. Action NC volunteers go door-to-door speaking about the vaccine. When they find someone willing to get the vaccine, the volunteer calls an on-site medical professional to administer the vaccine.

According to Robert Dawkins, political director at Action NC, the only difference between Action NC’s door-to-door campaign and doses-to-door campaign is the presence of a Mecklenburg County Health Department vehicle and volunteers who can administer the vaccine on site. Dawkins also told WBTV.com that Action NC “get[s] people that will say ‘yes I will get the shot,’ but the follow-up has always been the issue.” Having a volunteer on hand to vaccinate any willing individuals makes it easier and more efficient for Action NC to reach its goals.

Michael Regan, Biden’s choice for the administrator of the Environmental Protective Agency (EPA), spoke to Action NC volunteers and thanked the volunteers for their targeted outreach. He told volunteers that to reach President Biden’s 70 percent goal, “it’s going to take every single one of us.”

Action NC’s canvassing plan is similar to campaigns launched to support and promote Obamacare. In 2013, Capital Research Center reported that the Centers for Medicare and Medicaid Services made grants totaling $67 million to 105 organizations “to help sell and explain Obamacare to individuals.”

Obamacare “navigators” spoke with individuals and promoted Obamacare and then helped them sign up for health care coverage. Champion of Coverage groups vowed to promote “enrollment [in Obamacare] by emailing its members, hanging posters or giving out fact sheets and brochures, [and] holding conference calls.”

Similarly, Action NC volunteers are educating individuals about the benefits of the COVID-19 vaccines and then helpfully getting them vaccinated at their own doorsteps.