“A special place in hell” 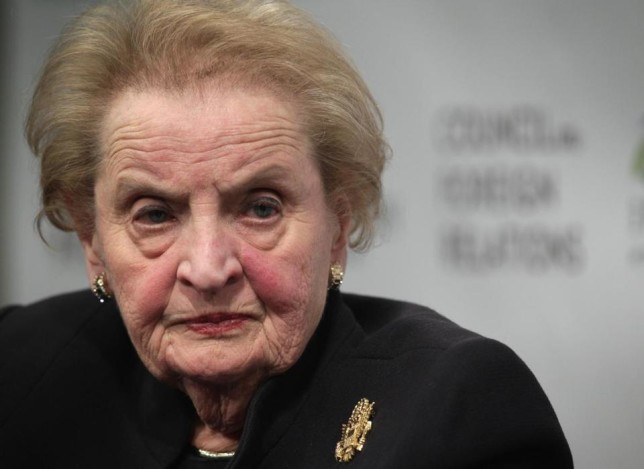 Former Secretary of State Madeleine Albright, introducing Hillary Clinton at an event the Saturday before the New Hampshire primary, noted that “There’s a special place in hell for women who don’t help each other.”

In the primary, Bernie Sanders beat Clinton by 11 points among women.

The New Hampshire result came as a disappointment to the Clinton campaign, which hoped to garner votes based on Secretary Clinton’s gender. She is certainly a strong advocate on women’s issues—supporting taxpayer-funded sex-selection abortions, which target little girls; backing Obamacare, which forces a 60-year-old woman working behind the counter at McDonald’s to pay for the birth control of a 30-year-old soon-to-be-millionaire graduate of Georgetown Law; and working to install regimes in North Africa and the Middle East that subjugate and sexually mutilate women. (WikiLeaks’ Julian Assange, of all people, noted correctly that she “set back women’s rights in the Middle East by hundreds of years.”)

She has served as a role model for certain feminists by riding her estranged husband’s coattails into the halls of power while smearing his sexual-abuse victims as whores, trailer trash, and members of the Vast Rightwing Conspiracy. A self-described “Progressive,” she supported the Iraq War and the bailout of Wall Street millionaires, and she pledged to undo the First Amendment in order to protect herself from criticism. (The pro-First Amendment decision in Citizens United, she said on New Hampshire Primary night, must be overturned; it was, she said, a travesty because it allowed “a right-wing attack on me and my campaign.”)

She has advanced gender equality by proving that a woman in politics can be as corrupt as any man—with the “commodities deal” scheme for laundering payoffs from polluters… the Whitewater deal (selling people real estate they couldn’t afford, repossessing the properties, repeating the process)… the apparent mass collection of information, suitable for use in blackmail, from Republicans’ FBI files… Clinton flunkies’ role in the sale of missile technology to China… the granting of presidential pardons based apparently on political considerations and cash… the Benghazi deception (silencing critics of radical Islam while leading voters in 2012 to believe wrongly that Al Qaeda was “on the run”)… the theft of at least 66,000 government e-mails (and the storage of those e-mails, containing some of our country’s most precious life-or-death secrets, in a way that made them readily available to our country’s enemies)… and the “speaking fees” (ha!) that made Hillary and Bill and Chelsea ultra-rich. In the eight years prior to her presidential run, which included Hilary’s time as secretary of state, the Clintons raked it in at an average of almost $350,000 a week. Politico reported last September: “She earns more for a 20-minute speech to an industry trade group than a dozen fast-food workers make in a year.”

[I first wrote about the corrupt activities of Hillary Rodham more than 30 years ago when she chaired the board of the Legal Services Corporation, a government agency that was supposed to provide legal aid to the poor but became instead a source of employment for members of the National Lawyers Guild, an anti-American hate group that was widely and correctly considered the legal arm of the Soviet-controlled Communist Party.]

It’s true what they say: If she won this year, it would be historic.

Clinton would be the first female crooked politician ever elected president of the United States.

Don’t think that, by exposing her corruption and mendacity, you’ll turn her supporters against her.

Clinton supporters know what she is. They don’t care.

Rather, they see it as a plus. Their ideal president is someone who can pull the wool over the eyes of the enemy, whether the enemy is Republicans or anyone else who refuses to get with the program.

Max Ehrenfreund of the Washington Post wrote a few days before the Iowa caucus (https://www.washingtonpost.com/news/wonk/wp/2016/01/28/it-really-doesnt-matter-if-hillary-clinton-is-dishonest/  ) in an article headlined “It really doesn’t matter if Hillary Clinton is ‘dishonest’”:

Americans might just be overly attached to the ideal of a scrupulously honest president. Especially at a time of intense polarization in Congress, recent experience suggests that the direction of public policy will have little to do with whether the Oval Office’s next occupant really believes what he or she says on the campaign trail. . . .

“It’s necessary, in politics, to have a certain willingness to bend the truth,” [said Martin Jay, a historian at the University of California at Berkeley and author of a book called The Virtues of Mendacity.] “You’re not electing the pope.” . . .

For progressive voters looking for the candidate who could best advance their goals in the White House, personal traits other than honesty might be more relevant: skill in negotiation, say, or in managing the bureaucracy or the press.

These traits aren’t incompatible with honesty, but it might be difficult psychologically for a candidate to convince voters that she is both trustworthy and a savvy negotiator. . . .

“I don’t think that honesty and effectiveness necessarily go hand in hand,” [John Hudak, a political scientist at the Brookings Institution] said. “At the end of the day, if she’s [Hillary Clinton] elected president and she’s effective, people aren’t going to care too much.”

Got that? You don’t want to elect an honest president, because he or she might not be an effective negotiator.

Because the most effective negotiator is someone whom no one trusts. Right?

This, my friends, is the world inside the heads of Hillary Clinton and her fans, a world into which they hope to welcome the rest of us soon. It is a special place, indeed.