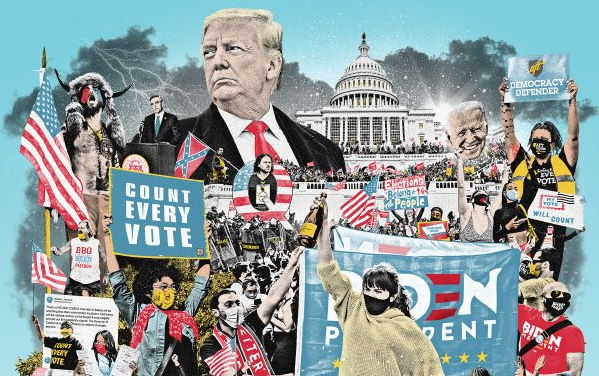 Many political observers are still buzzing about Time magazine’s bizarre behind-the-scenes report, “The Secret History of the Shadow Campaign That Saved the 2020 Election.” Author Molly Ball showcases myriad ways the 2020 election was “fortified,” yet supposedly not “rigged,” by the leftist activists she admits formed a “conspiracy” and a “cabal” aimed at shaping the election.

Buried among the self-aggrandizing rhetoric and tales of meetings with tech titans to demand they censor conservatives, Ball quotes an extraordinary claim by Tom Lopach, CEO of the Voter Participation Center: “All the work we have done for 17 years was built for this moment of bringing democracy to people’s doorsteps.”

One would think that when conservative legislators had the opportunity to confront one of the players in Ball’s piece—in this case, Joe Biden’s Justice Department nominee Vanita Gupta, who bragged to Time about convincing tech titans that they needed to join the election “conspiracy”—the legislators would make the most of it.

However, in Gupta’s March confirmation hearing—over a month after the Time article dropped—only GOP Sen. Ted Cruz (R-TX) brought up the dinner meeting with Facebook CEO Mark Zuckerberg and other tech representatives that Gupta patted herself on the back for in Ball’s article.

Playing Catch-Up to the Left

Here’s what Ball wrote in February for Time:

In November 2019, Mark Zuckerberg invited nine civil rights leaders to dinner at his home, where they warned him about the danger of the election-related falsehoods that were already spreading unchecked. “It took pushing, urging, conversations, brainstorming, all of that to get to a place where we ended up with more rigorous rules and enforcement,” says Vanita Gupta, president and CEO of the Leadership Conference on Civil and Human Rights, who attended the dinner and also met with Twitter CEO Jack Dorsey and others. . . . “It was a struggle, but we got to the point where they understood the problem. Was it enough? Probably not. Was it later than we wanted? Yes. But it was really important, given the level of official disinformation, that they had those rules in place and were tagging things and taking them down.”

If conservatives feel like they’re always playing catch-up to the Left, this is an example of why. In this passage, Ball spills the beans and reveals how the Left pressured Big Tech to intervene in the election by censoring conservatives, yet conservative leaders hardly noticed and didn’t grill the left-winger who led this pressure campaign, even when she was sitting in front of them and forced to take their questions.

Ball—previously best-known for a “cloyingly adulatory” biography of House Speaker Nancy Pelosi—also spends several thousand words assuring her readers that her conspirators weren’t trying to change the “balky” election infrastructure to ensure a Biden win. That is, they weren’t changing election rules at the last minute to help their Democratic turnout efforts. No, they were just selflessly shoring up “Democracy,” never giving a thought to who might win the election.

A Conspiracy for Democrats

She pretends her conspiracy includes Republicans, but almost the only examples she gives are the Chamber of Commerce and Zach Wamp. Yet the Chamber, which has backed lots of Democrats lately, only reached out to her Democratic conspirators days before the election to suggest a joint declaration opposing mob violence. Perhaps the Chamber hoped to constrain not only right-wing mobs but also the left-wing mobs that Ball makes clear her conspirators control like a faucet.

As for Zach Wamp, this former Republican official is a top advisor to Issue One, a campaign finance “reform” group endorsed by the Democracy Alliance (a donor cabal co-founded by George Soros). The group employs his son Weston, who frequently donates through the Democrats’ ActBlue platform. While compiling a research memo on all the persons and groups in Ball’s article, my Capital Research Center colleagues searched newspaper databases but found nothing to confirm Ball’s claim the elder Wamp is “a Trump supporter.”

So much for the conspiracy’s bipartisanship. The truth Ball is hiding appears when you examine Lopach’s group. Sasha Issenberg, a liberal journalist like Ball but unlike her a straightshooter, explained how the Voter Participation Center operates in his 2012 book, The Victory Lab: The Secret Science of Winning Campaigns: “Even though the group was officially nonpartisan, for tax purposes, there was no secret that the goal of all its efforts was to generate new votes for Democrats” (p. 305; for more on this important book, see our report here).

The center was accused by NPR of suppressing black voters to help Hillary in a 2008 primary against Barack Obama. This cycle, its sister group Center for Voter Information received criticism from ProPublica and the Washington Post for messing up voters’ mail-in ballots. Like Ball, ProPublica reported that these groups were massively influential in the election through their millions of voter mailings. Unlike Ball, ProPublica reported that the groups’ electioneering was “extremely disruptive” and received criticism from “election officials from both parties.” ProPublica also documented that the groups’ leaders have “deep ties to Democratic politics.”

ProPublica’s headline alone makes laughable Ball’s claim that the “conspiracy” consisted only of saintly nonpartisans saving Democracy. Here’s how the left-wing but honest reporters at ProPublica summed it up: “A Nonprofit with Ties to Democrats Is Sending Out Millions of Ballot Applications. Election Officials Wish It Would Stop.”

Likewise, Issenberg’s book paints a much more honest portrait of the man Ball calls the “architect” of her conspiracy, longtime AFL-CIO political director Michael Podhorzer. Issenberg’s book, written a decade ago, reports that Podhorzer even then had for years coordinated with dozens of left-of-center groups that focus relentlessly on electing Democrats via ever-more-sophisticated turnout techniques.

In the pre-Zoom era, Podhorzer hosted political operatives for regular lunches at the AFL-CIO  which became so large they morphed into the Analyst Institute, a think tank that hosts the Democratic turnout brain trust. Simultaneously, Podhorzer helped launch Catalist, the Democratic data warehouse accused of conspiring, so to speak, with unions, nonprofits, and political groups across the Left to evade the campaign finance laws that their preferred political party claims to hold dear.

A Shadow Campaign of Decades

So the “shadow campaign” Ball claims popped up in 2020 actually predates Trump by decades. The mainstream media hasn’t reported on this sophisticated, highly coordinated effort by the Left to find ever stronger tools to turn out Democratic voters. But don’t blame the media for not knowing about it; most Republicans didn’t either.

Perhaps that’s why, when given the chance to ask about it in March as Biden’s DOJ nominee sat in front of them after having gladly given herself credit for helping the plan succeed, they sat there, apparently stricken deaf and dumb.

Scott Walter is president of the Capital Research Institute.