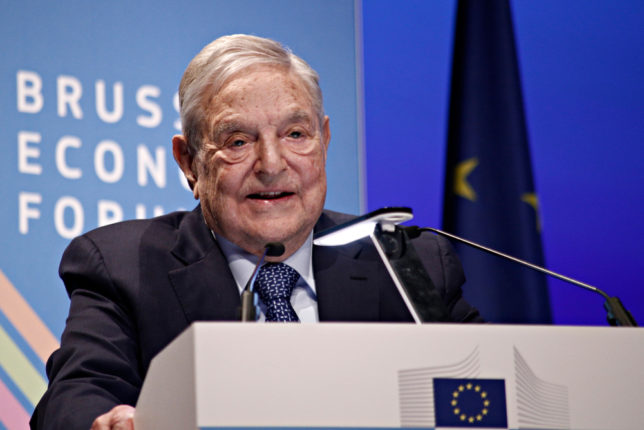 If proof was ever needed that the Left’s cup runneth over with cash, here it is.

New filings reveal that George Soros’s nonprofit empire has poured out nearly $21 billion since 2000, making him perhaps the biggest ATM for leftist political causes in the world.

The Soros Network (or Open Society Network) consists of a handful of foundations and 501(c)(4) lobbying groups funded by the Hungarian-born billionaire. He has made no secret of his goal of using his enormous wealth—earned in capitalist markets—to reengineer the country in his own image. In practice, that involves funneling six- and seven-figure grants to professional activists pushing policy and electing Democrats in the name of “charity.”

At the heart of the Soros Network are the Open Society Foundations (OSF) and its sister, the Foundation to Promote Open Society (FPOS). (Confusingly, OSF’s official name in IRS disclosures is the Open Society Institute, a remnant of its founding in 1993 as a think tank.) It’s unclear why Soros maintains two separate foundations, especially given how expensive they are to run under tight IRS regulations. Regardless, OSF seeded the younger FPOS with $1 million in 2008, and the FPOS has since grown into a $2 billion behemoth (as of 2021) compared with OSF’s $988 million in revenues in the year.

Between them, Soros’s foundations funneled a whopping $2.7 billion into (largely left-wing) nonprofits in 2021 alone, 90 percent of which flowed from FPOS.

In addition, nearly $577 million in grants was paid out by the network’s top advocacy arms: the Open Society Policy Center, Soros’s oldest 501(c)(4) and primary lobbying group, and the more mysterious Fund for Policy Reform.

We know a fair amount about the Open Society Policy Center, which is run by former U.S. Rep. Tom Perriello (D-VA) and was the second-biggest spender on federal lobbying in 2019 at $48.5 million.

FPR apparently serves one role: piping money to FPR, Inc., using staffers from the Open Society Foundations. And it’s moved at least $1.5 billion since 2015—most or all of it by selling shares in the Cayman Islands branch of Soros’s Quantum Endowment hedge fund, likely donated by Soros himself at the group’s creation seven years ago. That’s especially impressive considering that the IRS doesn’t permit donors to deduct their contributions to 501(c)(4) groups from their income taxes, unlike donations to (c)(3)s.

Pass-through grants from FPR, Inc., in turn form the budget for the Open Society Policy Center, which in 2021 was $196 million. The FPR, Inc., also grants hundreds of millions of dollars annually to overseas groups—$627 million in 2019 alone—the names of which go unreported in IRS disclosures.

The list of activist groups bankrolled by Soros is so huge it would be easier to say which groups aren’t funded by the New York billionaire. Nevertheless, we’ve recorded the top recipients in 2021.

Speaking of “dark money,” Soros gave $22 million to Tides Advocacy, one of the top incubators of new political groups on the Left and the (c)(4) wing of the better-known Tides Foundation. One grant was specifically earmarked for the Electoral Justice Project, Black Lives Matter’s voter turnout machine.

The network gave $20 million to Way to Win Action Fund, a strategy hub for electing Democrats that spent $400,000 in independent expenditures to flip Georgia’s Senate seats blue in the January 2021 special election.

Also on the network’s radar was the Voter Registration Project, which received $4.5 million to identify and register likely Democratic voters ahead of the 2022 midterms. Stacey Abrams’s turnout group Fair Fight Action got another $2 million from Soros for “voting rights and election administration” advocacy.

But that pales next to the stunning $30 million Soros’s groups paid to America Votes in 2021, the self-described “coordination hub of the progressive community.” America Votes is arguably the largest cog in the Left’s voter registration machine, boosting Democratic turnout in battleground states while undermining election integrity laws with help from its secretive donors.

The Soros Network funneled $17.5 million to Color of Change and its lobbying sister, which were both created by the former Obama administration “green jobs czar” Van Jones to continue Obama’s agenda—mandating government-run health care, pushing the Green New Deal, and silencing conservative speech.

Borealis Philanthropy, a Black Lives Matter partner known for spawning new activist groups, received $21 million from the Soros Network in 2021. Borealis specializes in identity politics— LGBTQ, transgender, and radical BIPOC (black, indigenous, people of color) agitation groups. Its grant recipients include the radical group Assata’s Daughters, named for the American communist and convicted murderer Assata Shakur, who is currently living in Cuba, beyond the reach of the U.S. justice system.

Of course, this is just the tip of iceberg for George Soros’s global nonprofit empire and probably only a fraction of what he spent in the 2022 midterm elections. The Wall Street Journal reported in November that Soros had donated $128 million to Democratic committees, making him the largest donor in the midterms. That was in addition to a cool $50 million contribution to his Democracy PAC in December 2022, which redirects funds to other Democratic super PACs.

That’s surely the legacy of George Soros. But how many more years does the 92-year-old billionaire (and his money) have left?