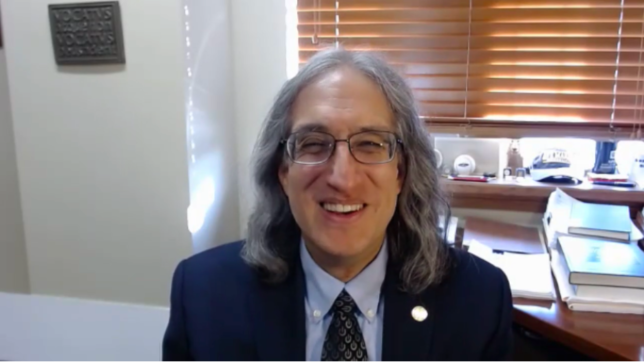 The scholar of nonprofit and election law talks to Michael E. Hartmann about what should and shouldn’t be considered a subsidy for charities, and the relationships between charity, politics, and government.

Professor Lloyd Hitoshi Mayer has researched, studied, taught, and written about many various aspects of nonprofit and election law since he came to Notre Dame Law School 17 years ago from the Washington, D.C., office of Caplin & Drysdale, where he’d practiced in those same areas for almost a decade.

Mayer’s recent published scholarship, for example, has thoroughly examined charitable crowdfunding, when tax exemption should and shouldn’t be considered a subsidy, fundamental public policy and the tax exemption of churches, and government use of “Big Data” in nonprofit regulation, among other things. His thoughtful “When Soft Law Meets Hard Politics: Taming the Wild West of Nonprofit Political Involvement,” in Notre Dame’s Journal of Legislation, caught our attention in particular and likely will inform policymaking discourse in the coming years. 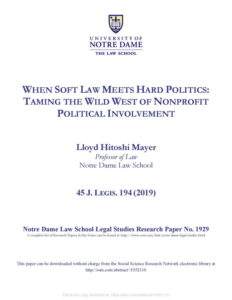 The engagingly good-natured Mayer was kind enough to join me for a conversation last week. The almost 10-and-a-half-minute video below is the first of two parts of our discussion; the second is here. In the first part, we talk about what should and shouldn’t be considered a subsidy for charities in general, and the relationships between charity, politics, and government.

“The tax deduction for charitable contributions is almost certainly a subsidy,” Mayer tells me. “The tax exemption itself is a little more complicated. … Most of the revenues that charities receive would not be subject to tax anyway because they’re, for example, gifts or they’re used for exempt purposes,” but “charities can invest money and get all the earnings tax free. Usually, for the most part, then they’re able to avoid some tax that otherwise [a] business or private individual would pay.

“This could be really significant,” he continues, “for the largest charities in terms of investments—the large universities … but also the private foundations that are out there that have a lot of money in the bank, frankly.”

As for charity and politics, “If you give money to a candidate, if you engage in lobbying, whether it’s an individual or business,” Mayer says,

The other issue—which is more subtle, but is also maybe more important—is, should charities be a bit separate from government. … That’s where the tension tends to come in. People think charity should be outside of … politics. [Charities] get these subsidies, which is great, but they shouldn’t be moving the government to do what they want to do. That’s the whole point of them being separate.

In the conversation’s second part, Mayer talks about past and potential future cross-ideological overlap in the critique of establishment philanthropy, non-exempt vehicles for wealthy givers, and the roles and capabilities of the Internal Revenue Service and the Federal Election Commission.

This article originally appeared in the Giving Review on February 14, 2022.